“Start it up. Power it up.” – Bangkok’s first official tech startup gathering 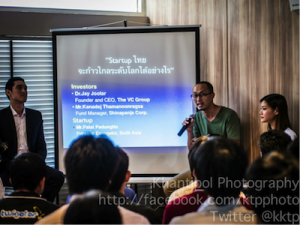 As we can see that the region has been all hyped up about startups for a while, people from every corner have been putting their focus on pushing local startups to become successful businesses and turn them into regional players, Thailand is not far behind either. Several Thai tech startups have been spotted in regional stage and this brings in more ideas and money into the game. And finally, Bangkok had its first official tech startup event with support from various hands and the name “Start it up. Power it up” gathering series has drawn more attraction to the community.

The event “Start it up. Power it up” was held at Hubba, Bangkok’s first co-working space service provider, by three main partners; thumbsup – Thailand’s leading tech blog, Spring News – a satellite news station and Hubba itself. The aim of the event was to gather local startups, mainly tech related businesses, the investors and the startup-to-be’s to exchange their ideas, experiences and even to create new opportunities for all parties. Despite its small size, the event drew in over a hundred registrations within a few hours after the announcement and the organizing team needed to close to registration long before its one week long registration period planned earlier. 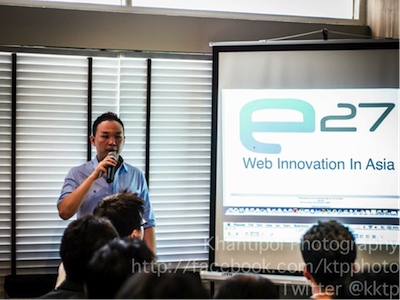 The event was arranged with 4 sub-sessions. The first session started off with the introduction about the event, how it was initiated and who were the hands behind it. The first MC, @tuirung, introduced thumbsup.in.th with recent cooperation with regional websites e27 and Tech in Asia, Thailand’s first university for startups called Disrupt University and Spring News satellite TV station, who co-produces the TV program for startups called “Thailand Can Do”.

The VC GroupAfter the break, the second session welcomed Dr.Jay Jootar (Founder and CEO of ), Mr. Kanadej Thamanoonragsa (Fund Manager of Shinapanja Corp.) and Mr.Patai Padungtin (Principal Evangelist from Builk Asia) to the stage. This session the MCs, @chyutopia and @mimee, interviewed the three guests about several topics. Most of the discussion focused on their opinions toward the obstacles and the opportunities for Thai startups, not only in domestic level but also in regional level after Builk has recently stepped up to win the award from e27’s Echelon in Singapore and the company is right now planning to enter Indonesia. Dr.Jay pointed out that the three main components needed to help tech startups succeed are the programmers, the entrepreneur and the investor and currently Thailand is lacking of these entrepreneurs. What’s important is that fact that Thai businesses should give more

importance to English language as well. 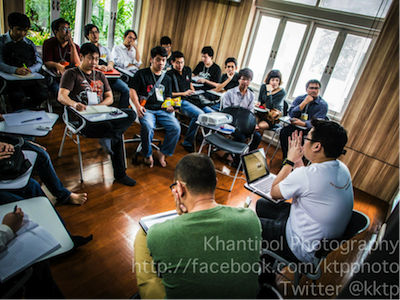 The third session was allocated specially for e27 to share its perspectives in a regional level with the audience. Gabriel Yang, e27’s Media and Events Manager, pointed out that startups needed to connect to the right people and emphasize again that English is now mandatory. Sticking to the ideas is crucial but startups also need to know when to let go. Discussing with as many people as possible will help shape up the idea and increase the opportunity for success.

The last session was split into two group discussions; How to grow Thai startups? and Which business model works best?. The first discussion was moderated by @jakrapong with invited guest @krating, the founder of Disrupt University. The second was moderated by @charathbank with Patai, Principal Evangelist from Builk Asia. Both sessions opened the stage for the audience to freely share their ideas and opinions with exclusive sharing from both special guests who had direct experience in the topic.

The four hour long event has received great feedback from the audience and the guests and we would like to thank everyone for helping make this event possible. We will come back with “Start it up. Power it up.” #2 and this time, we will go bigger. Stay tuned.

A tech business observer who enjoys the surprises the innovations bring. My past experience includes business development in a mobile operator, an online business and currently I’m working for a big multinational company in Thailand.

Thumbsup.in.th is a leading tech blog from Bangkok, Thailand. We have been reporting on digital business, local innovation, startup story and technology since early 2011.